The word “wine” conjures up a world rich in history, tradition, culture and sentiment. It is a drink which has “accompanied” man for centuries, since the advent of the first agricultural civilizations.

A drop of History

Winemaking from grapes is a natural process. Unlike fermentation for other fruit wines, grape wine sometimes requires the addition of sugar. In fact from the second millennium B.C. to not so long ago, there haven’t been any big changes in cultivation and wine making. Today in Italy we still call some grape farming methods “Greek” or “Etrurian”.

Most historians, archaeologists, linguists and botanists agree that wine was “invented” somewhere south of Caucasus and north of what we now call Iraq. Old historians tell us about wine transports along Euphrates River, from Armenia to the rich city of Babylon.
For the Sumerians, vine and wine were symbols of immortality. Gilgamesh (a character from Sumerian mythology) has an important encounter with Siduri:

“Beside the sea she lives,
the woman of the vine, the maker of wine;
Siduri sits in the garden at the edge of the sea,
with the golden bowl and the golden vats that the gods gave her.”

In the Biblical Book of Genesis, after the Great Flood, Noah begins anew by planting a vineyard and making wine. He is credited as being the first to plant a vineyard.
In the West, the history of wine is linked to Greece. In fact, wine came probably to Europe with the spread of the Greek civilization a bit less than 3,000 years ago. Homer’s Odyssey and Iliad both contain excellent and detailed descriptions of wine.
The Greeks also learned to add herbs and spices to mask spoilage. Wine was consumed in Greece at breakfast or at symposia. The Greeks from Sicily (so called Sikeliotes) invented an ability game, the Kottabos that was played during symposia.

Ancient Greek religion had a god of wine, whose name was Dionysus. In ancient Rome, the same god had the early name of Bacchus, then changed into Liber.

So wine arrived in Italy, called Enotria, land of wine, by the Greeks, and from here it reached every corner of Europe. So wine making became so common that a Roman emperor, Domitian, in 92 A.D. enacted a decree that orders to extirpate 50 % of vineyards outside Italy and the prohibition to plant new ones in Italy. As we can see European Community did not invent anything really new!
Today wine is a drink whose consumption is increasing day by day (world wide production is about 26 million tonnes), reaching new followers outside Europe, is a product with a relevant economical interest and a sector where different people are working, such as farmers, agronomists, winemakers, architects, journalists, organizers of fairs and contests and, at the same time, is a social and cultural topic.
One could reasonably conclude that Wine is Culture. 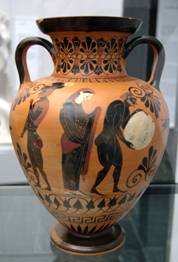 KRATER - to blend the wine 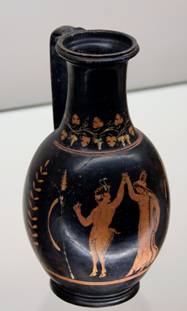 OENOCHOE - to pour the wine

KYLIX - to drink the wine 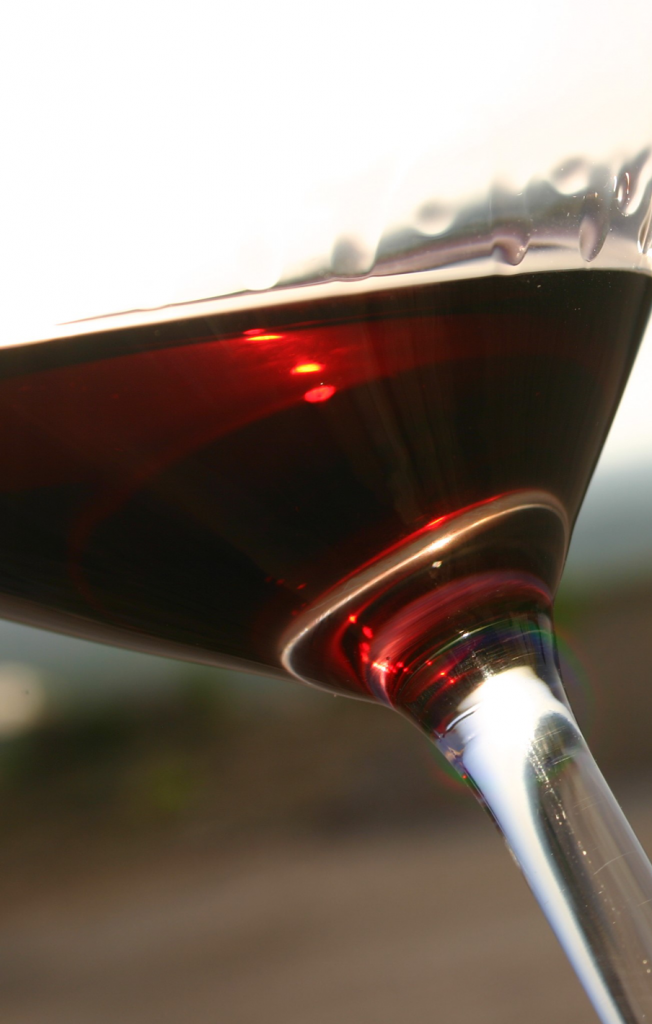 In our opinion, there is some exaggeration on this and other similar topics and we believe that a good wine can be enjoyed with any glass. Having said that, it should be noted that not all glasses are right for appreciating good wine, and different types and styles of wine are best drunk with a certain type of glass, even though the quality of the contents is more important that the quality of the container. The tulip-shaped glass is advisable for young white wines. For red wines we have to make a distinction: for the young ones we will use a chalice of different sizes, while for the aged ones we prefer a so called balloon glass.
Only one indication is mandatory: the glass must be made of glass or crystal, transparent and odorless. Transparent because two of the elements to “taste” are color and density of the wine and one can do it with a transparent glass only; odorless for obvious reasons, if you want to “feel” the scents of wine, no other smell must interfere.

For any dimension of the glass, we should fill it at around one third to best appreciate qualities of the wine that also depends a lot from the temperature. In fact, the same wine at different temperatures can drastically change. Therefore, deviating from our normal style, we advise the following serving temperatures:

For red wines it is also necessary treat with caution “room temperature”, as in fact “room temperature” refers to the ideal temperature of a perfect wine cellar. Therefore one should not be ashamed of putting his/her bottle of red wine in an ice bucket in summer, in order to lower the temperature from the 30 degrees (86 °F) of actual room temperature (in essence the external temperature) to the 18 degrees (64 °F) at which the wine should be served, and sometimes this is even lower for less full-bodied wines.

This website uses cookies to improve your experience while you navigate through the website. Out of these, the cookies that are categorized as necessary are stored on your browser as they are essential for the working of basic functionalities of the website. We also use third-party cookies that help us analyze and understand how you use this website. These cookies will be stored in your browser only with your consent. You also have the option to opt-out of these cookies. But opting out of some of these cookies may affect your browsing experience.
Necessary Always Enabled
Necessary cookies are absolutely essential for the website to function properly. This category only includes cookies that ensures basic functionalities and security features of the website. These cookies do not store any personal information.
Non-necessary
Any cookies that may not be particularly necessary for the website to function and is used specifically to collect user personal data via analytics, ads, other embedded contents are termed as non-necessary cookies. It is mandatory to procure user consent prior to running these cookies on your website.
SAVE & ACCEPT