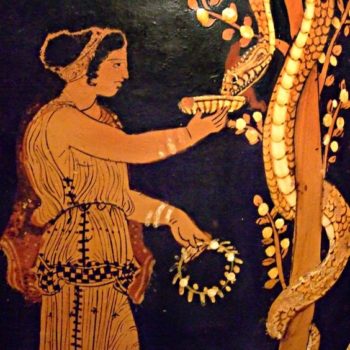 In Ancient Greek mythology, the Esperides were the Nymphs of evening and sunset, and therefore also called the Nymphs of the West.

They lived in a marvelous garden somewhere in the Western world (of course somewhere west of Greece). In this garden there was a tree producing golden apples, that gave immortality when eaten.

Paris offered a golden apple to Helen of Troy, as a winner in a beauty contest, and thus began the famous war of Troy, that was immortalized by Homer. To protect the golden apples there was also a dragon, that was killed by Heracles.

In some old tale the Esperides garden was said to be located in Sicily.

This website uses cookies to improve your experience while you navigate through the website. Out of these, the cookies that are categorized as necessary are stored on your browser as they are essential for the working of basic functionalities of the website. We also use third-party cookies that help us analyze and understand how you use this website. These cookies will be stored in your browser only with your consent. You also have the option to opt-out of these cookies. But opting out of some of these cookies may affect your browsing experience.
Necessary Always Enabled
Necessary cookies are absolutely essential for the website to function properly. This category only includes cookies that ensures basic functionalities and security features of the website. These cookies do not store any personal information.
Non-necessary
Any cookies that may not be particularly necessary for the website to function and is used specifically to collect user personal data via analytics, ads, other embedded contents are termed as non-necessary cookies. It is mandatory to procure user consent prior to running these cookies on your website.
SAVE & ACCEPT